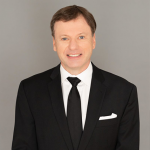 Tim is also a frequent contributor to Fox News Channel, sharing the personal stories of the World War II generation with a global television audience.

Tim’s 28 films produced to date have taken him to Guadalcanal, Corregidor, Bataan, Manila, the Philippines, the Solomon Islands, the Russell Islands, Banika, Peleliu, Guam and the Republic of Palau. In addition to trips to Iwo Jima (2021), Pearl Harbor, Hawaii (10 times), Normandy, France (15 trips), Holland, Belgium, Luxembourg, Poland (including Auschwitz and Treblinka Concentration Camp locations), the Czech Republic, Germany  and the Oval Office at the White House in Washington, DC to meet the president.

Tim worked as a television sports and news anchor and reporter for over 15 years in several states and U.S. markets including Michigan, Washington State, Florida (Fort Myers and Orlando) New York and Providence, Rhode Island. In 2000, Tim was appointed weekend sports anchor and sports/news reporter at Ch. 10 in Providence, another NBC affiliate. He held that job until 2004. While in Ft. Myers, FL Tim was designated sportscaster-of the-year by the Florida Sportscaster’s Association as well as a top feature reporter.

Tim is a graduate of the University of Rhode Island with a degree in Journalism.

Through various initiatives, Tim Gray and his project work have appeared in and been featured on: The Today Show; MSNBC, Fox News, Discovery Channel’s Orange County Choppers, CNN, C-Span, PBS stations around the country and the United States Armed Forces Radio Network and in newspapers such as USA Today, the Boston Globe and many others.